Leftism is the totem pole of JNU that defines Jawaharlal Nehru University’s (JNUs) unique character, content and craft of (critical) pedagogy, and (student) politics. The university space is a ‘moral community’ that transforms into a poly-cultural labyrinth and a political laboratory harboring ‘free radicals’ and ‘postmodern savages.’ Besides the cultural and ideological hegemony of the Marxists, Stalinists and Trotskyites, there are many other shades of the political bricolage that cohabit this ‘imagined community’ of activists and intellectuals. This diversity of ideological standpoints and the communitarian coda of ‘agreeing to disagree’ give JNU a unique place among the comity of educational institutions in India. There is a symbiosis of ideological polar opposites on campus which along the axis of ‘difference’ and ‘accommodation’ generates a distinct culture and multiple modes of protest and performativity of dissent. The tools and stratagems deployed to practice this ‘freedom of speech’ and ‘right to dissent’ include pamphlets, handmade posters, hunger strikes, lockouts, torchlight processions and General Body Meetings. In particular, the handmade posters have been JNU’s defining feature for the past so many years and occupy a pride of place among other modes of resistance. One can well say that this poster culture is participatory and a form of ‘collaborative art practice’ that tries to establish a ‘new social order’ through mega symbols of the carnivalesque that challenges various forms of hierarchies, oppressions, violence, and power structures.

The poster is a hybrid art form which is rendered through the visual as well as the written mode wherein both can complement or contradict each other. In general, the entire process of making posters is an act of imagination and creativity and become a great learning opportunity for the student community to metamorphose into activist researchers as it exposes them to poly-centric histories and subjugated knowledge systems. The poster culture of JNU which constitute an “empire of images” (Bordo: 2009) is an exemplar of “socially engaged art practice,” (Helguera: 2011) and artivism and is reminiscent of the old world charm of propaganda art and street protest. It incorporates expressing dissent through artistic innovations and creative leaps to rally and mobilize students for joining the caravan of dissenters. Rancière (2006) asserts the historically contingent form of art and about the political nature of aesthetic practices. According to him, art fosters political potential because it contests, impacts, and alters what can be seen and said and its ability to shift the aesthetics of politics or what he calls “primary aesthetics.” These aesthetic practices are, for Rancière, one of the primary means of creating resistance.

It is believed that India is an ‘iconic society’ due to the dominance of vision, and the student politics at JNU truly live up to this popular perception. The art genres in the posters include Cubism, Symbolism, Dadaism, Realism, Surrealism, and Primitivism, which together turn the campus into a ‘visual common.’ The posters, which also have a giant repertoire of cartoons, are contextualized with an accompanying script and are ploughed well in Marxist philosophy that ultimately brims with its communist worldview and intellectual assemblage. These acts of art’s ‘affective power’ and mechanical solidarity amount to a kind of visual appropriation besides its “offstage and onstage” dramaturgy and “dialogical aesthetics” (Kester). Together, they play a critical role in shaping the political consciousness of the neophytes and minor prophets of the moment (some of whom later mutate into the astute political knights of tomorrow).

In the context of JNU, the text in the posters are poems or verses by renowned revolutionary poets, playwrights, philosophers, and great statesmen, or visionaries from across the world like Marx and Lenin, Ambedkar, Bhagat Singh, Paash, Muktibodh, Manto, Nagarjun, Gorakhnath Pandey, and Brecht to name a few. The fonts, color scheme, and issue(s) depicted through the posters vary for different political outfits on campus.

This visual essay deals with the art and craft of protest in JNU which is famed for its radical political culture and collective and alternative ways of knowledge production. In particular, this essay attempts to give a visual tour of the ‘politics of the spectacle’ and the semiotics of handmade posters of this ‘cosmopolitan university’ where aesthetics and resistance combine to turn the campus into a giant public art gallery, a ‘visual commons,’ and a diorama of narratives and counter narratives. 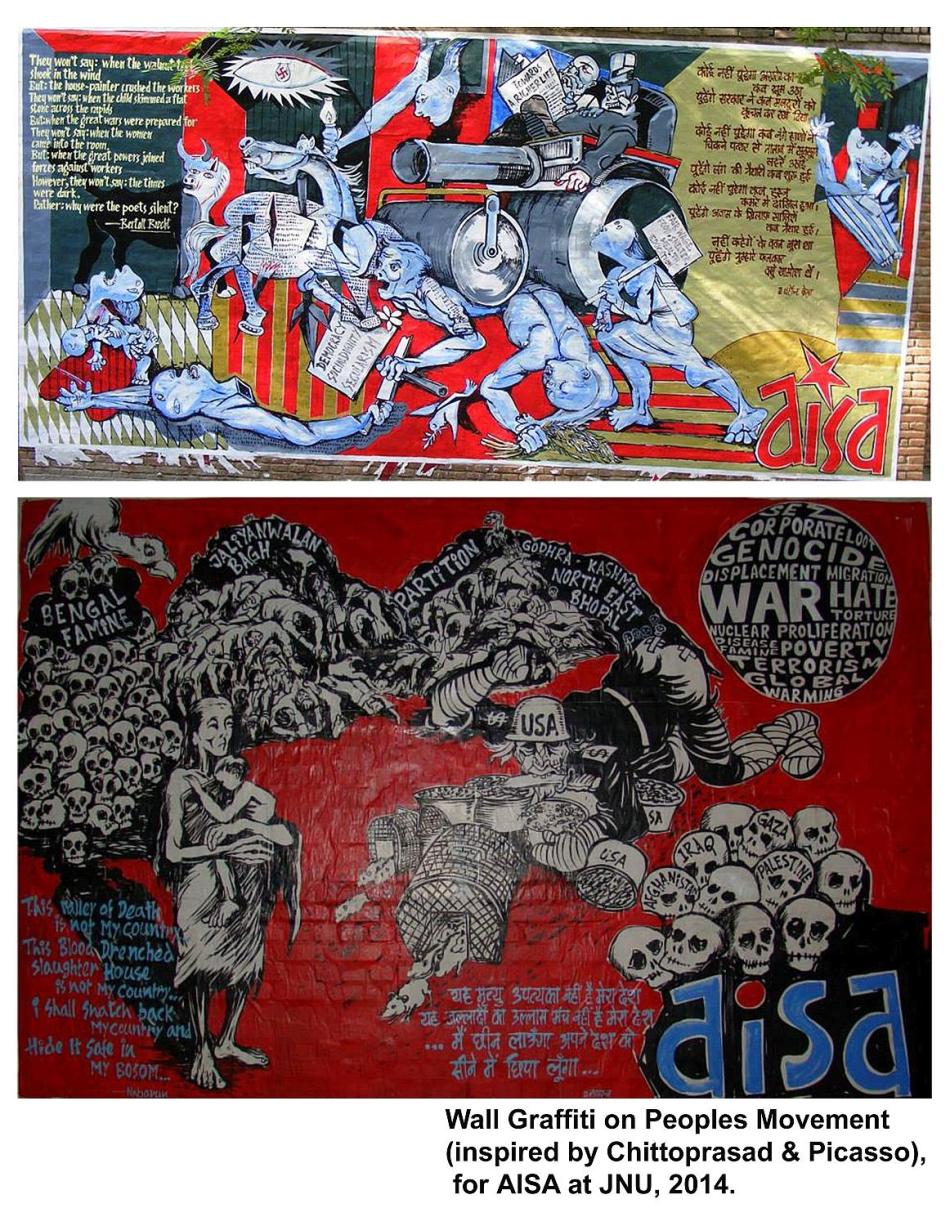 Fig 1. The top poster is an improvisation of Picasso’s La Guernica and reflects Brecht’s poem titled “In Dark Times” through which the poster addresses the issues of democracy, social dignity, and secularism, as the foundational principles of our constitution get crushed and vandalized under the tutelage of a despotic regime. The bottom poster is influenced by Chittaprosad Bhattacharya’s work and is reminiscent of his signature pen and ink sketches of the Bengal Famine of 1943. This poster lays out a trajectory of Indian genocides which includes the events in the pre- and post- independence period in different parts of India. On the other hand, Uncle Sam feeds himself on the spillover from the coffers and spoils of war waged against the ‘rogue states’ as perceived by the American administration. 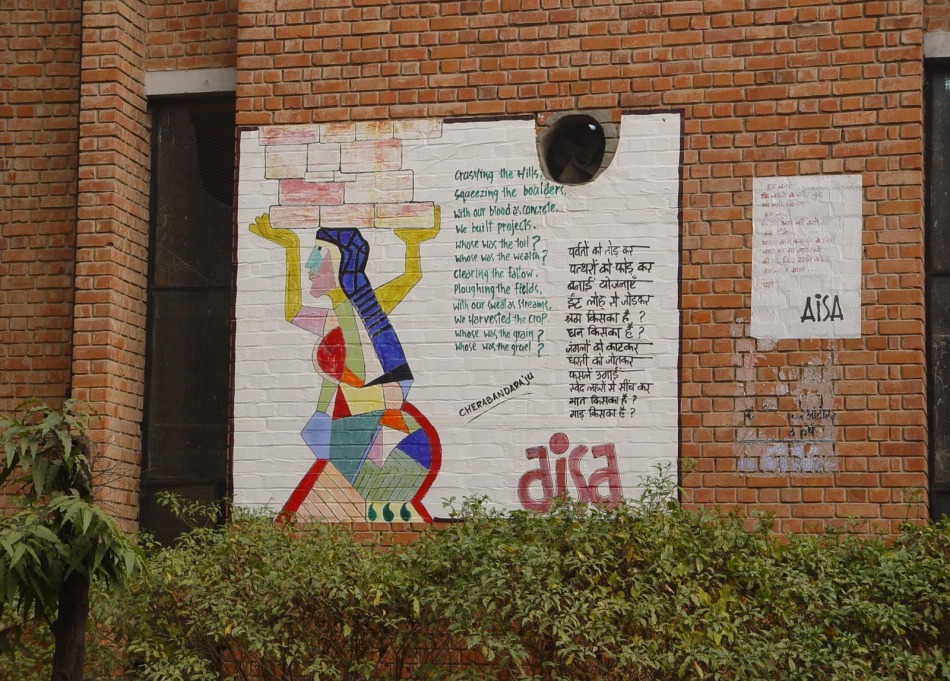 Fig 2. Done by the author himself in cubist style, the poster speaks of women’s unaccounted labor power and what he refers to as ‘role management’ in the Indian society. 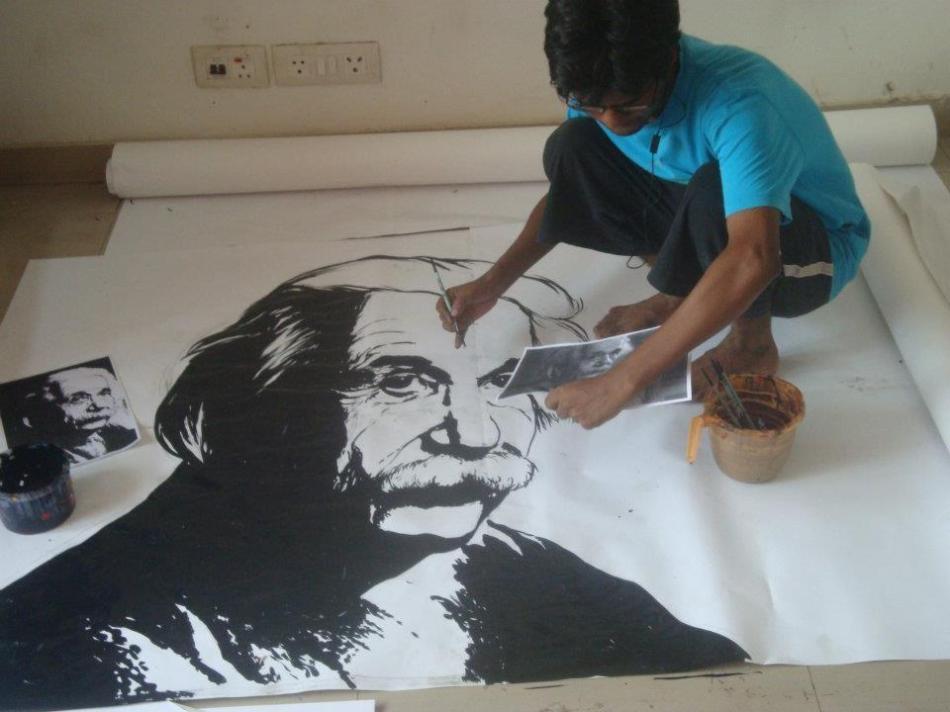 Fig 3. An artivist sketching Einstein directly from a photograph. 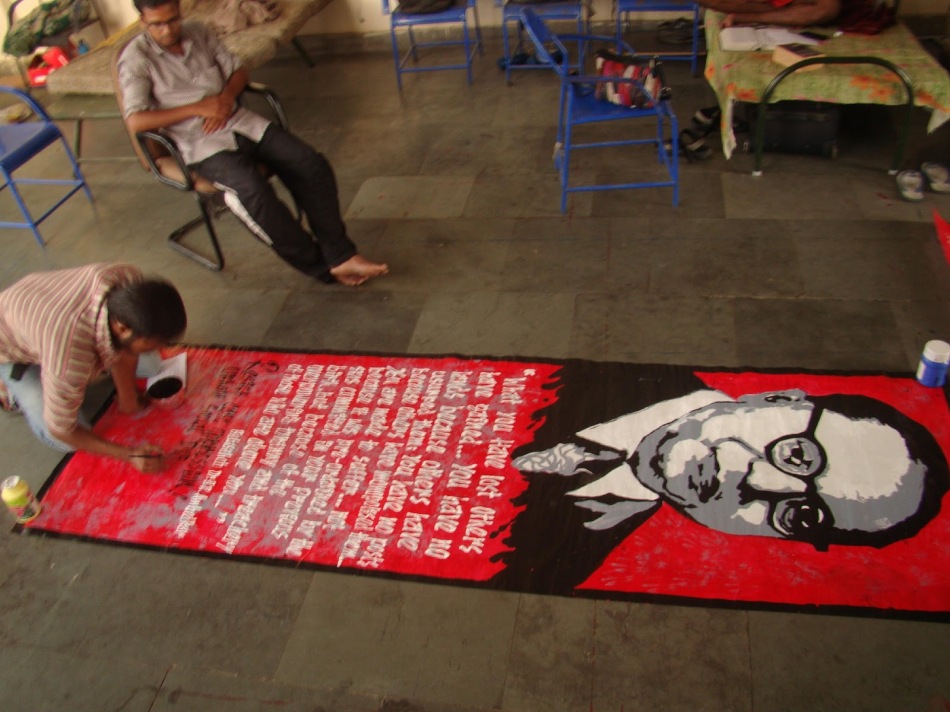 Fig 4. A student writing the script on the poster in a characteristic font. 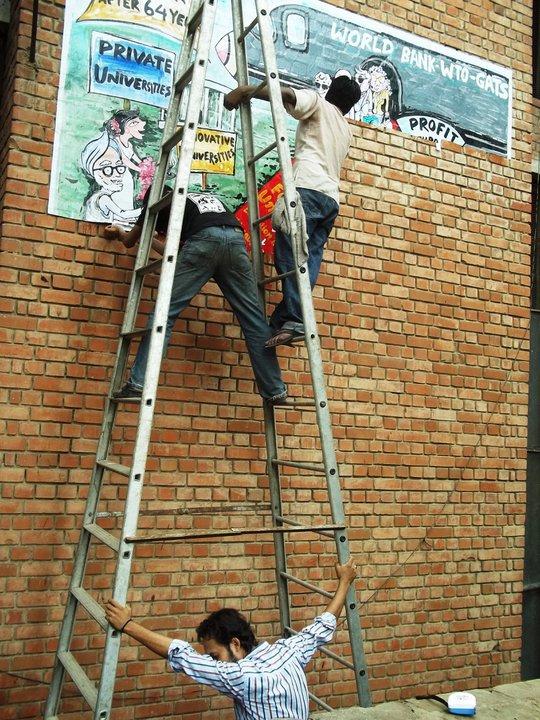 Fig 5. Sticking the posters on the walls of the university buildings (usually at strategic points like the various schools, library, and the canteens) is an example of socially engaged art where everyone plays a vital role in the entire process. The posters are divided into several parts (as seen here) and require a deft pair of hands to stick each part with precision. 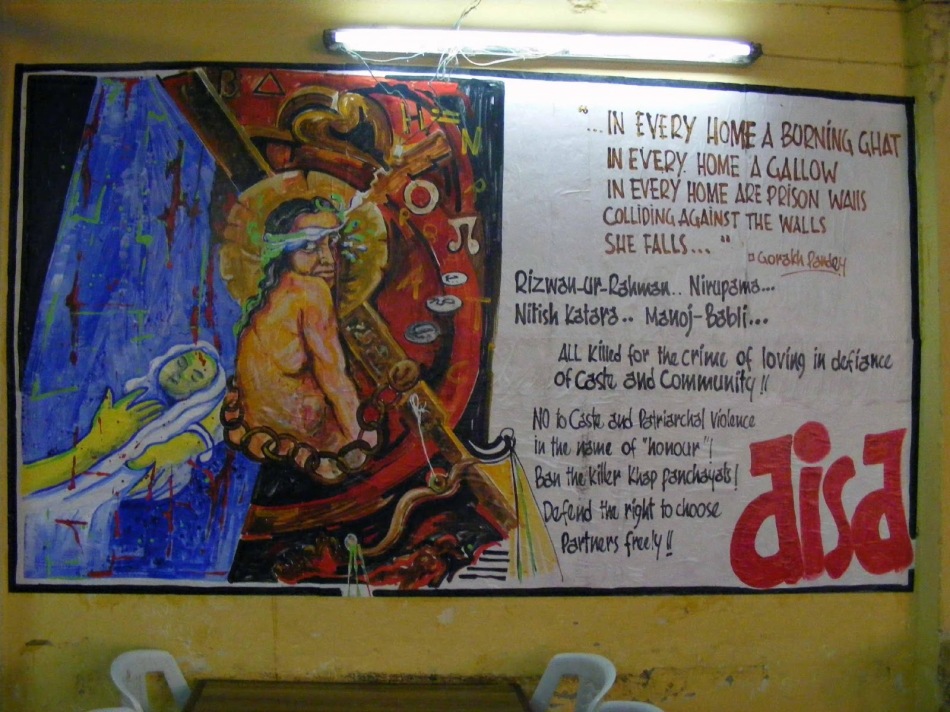 Fig 7. This poster depicts the stark consequence of naked capitalism and the McDonaldisation of society (Ritzer: 1993), which has especially affected the third world or developing economies. Manifested through the twin cultures of the ‘haves’ and ‘have-nots,’ both of which are widening, this visual depicts the world of plentitude through the McDonald’s burger while that of the starving child reflects the world of dietary precarity. 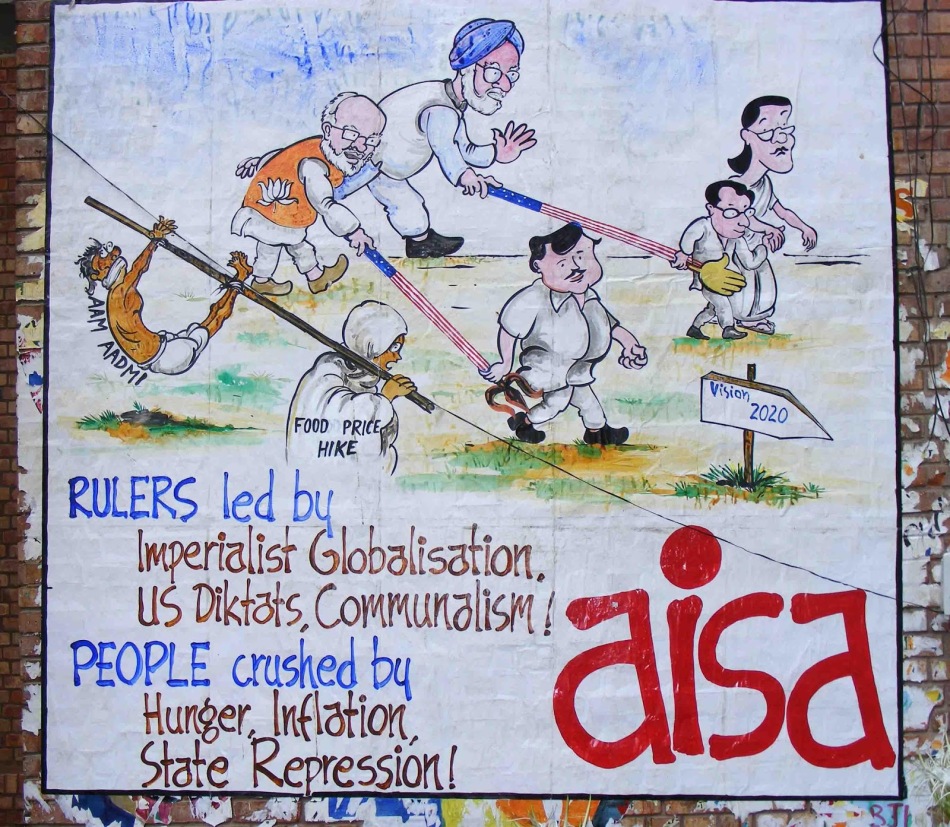 Fig 8. Cartoons are a popular artistic genre and, besides their satire and rhetoric, they are able to engage with the theme in a witty fashion. Here, the poster presents Indian leaders of the two main rival political parties with their respective ideological batons being led towards Vision 2020, a vision document and a futuristic template that reflects people’s aspirations, growth, and development potentials, as well as lays out the efforts required to fulfill this vision. It also shows that there exists a common ground between them as far as their general ideological underpinnings are concerned: they  are overall guided by the forces of imperialism, globalization, communalism, and American diktats while the common man (Aam Aadmi) stand victim to hunger, inflation, and state repression. 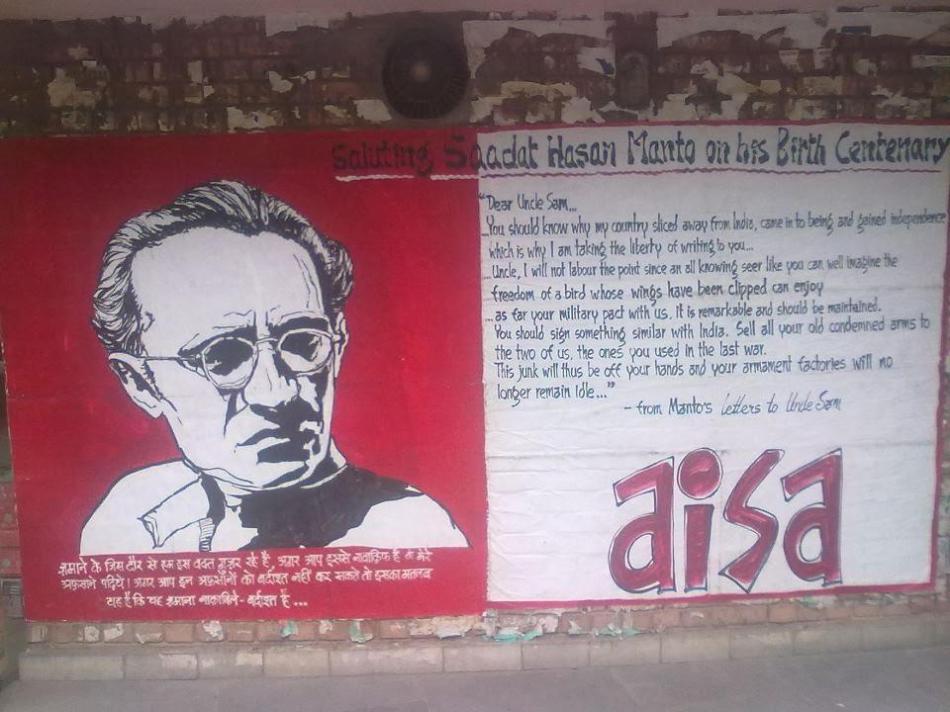 Fig 9. This poster celebrates the birth centenary of the famous Pakistani writer, playwright, and author, Saadat Hasan Manto. It further depicts lines from one of the letters in the “Letter to Uncle Sam” series written by Manto and addressed to the American administration against its imperialist designs and war mongering. 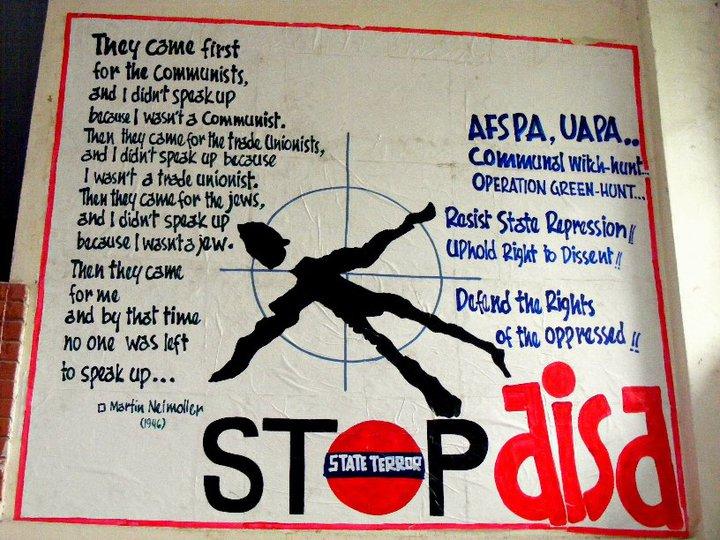 Fig 10. Resisting state repression through draconian laws like AFSPA, UAPA, Operation Green Hunt, and others have long been a theme of the posters of the left parties in JNU. 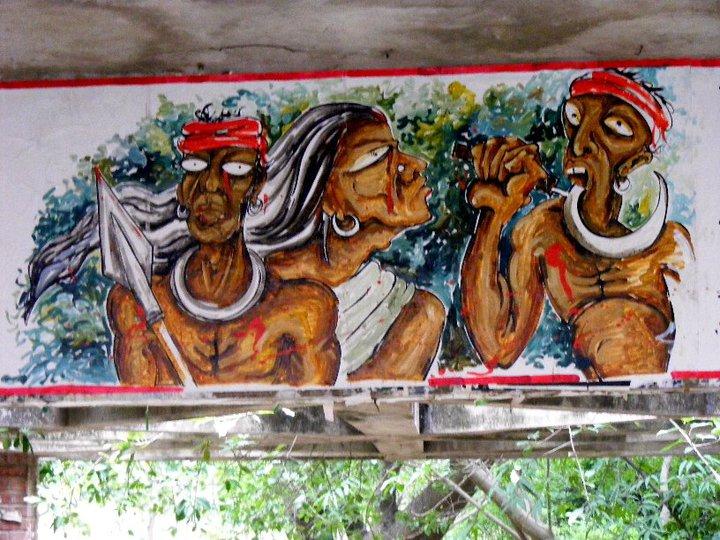 Fig 11. Subaltern communities and their issues have also long been a matter of concern and discourse for the left parties. 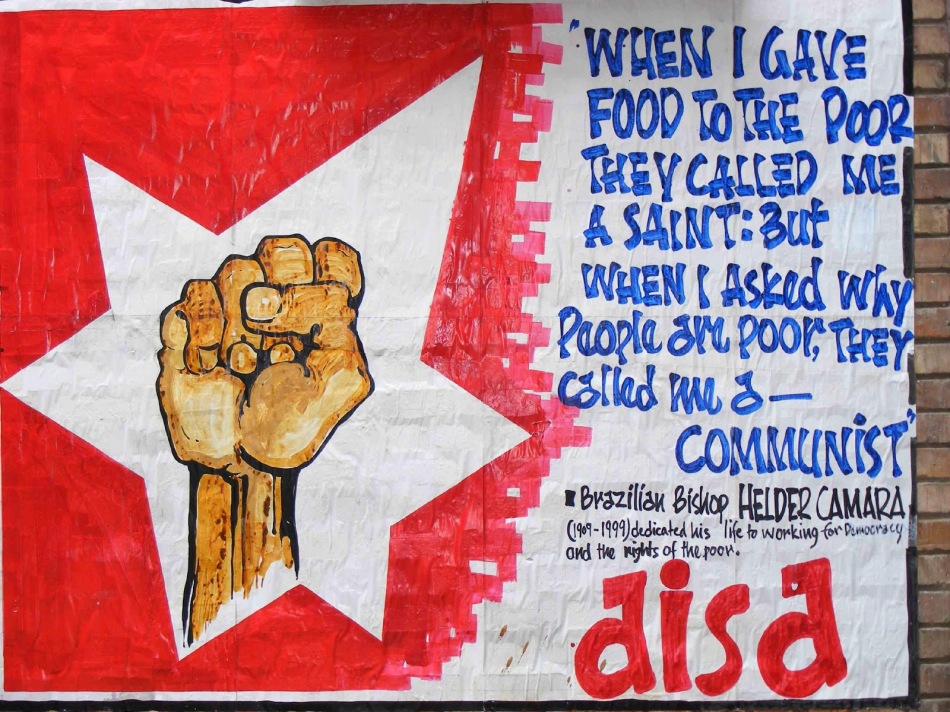 Fig 12. This poster about Communist witch-hunts shows a statement by the Brazilian Bishop Helder Camara who served during the military regime and was renowned throughout the world as the inspirer of Latin America’s ‘liberation theology’ movement. He was later killed for his fight for democracy and for the rights of the poor. 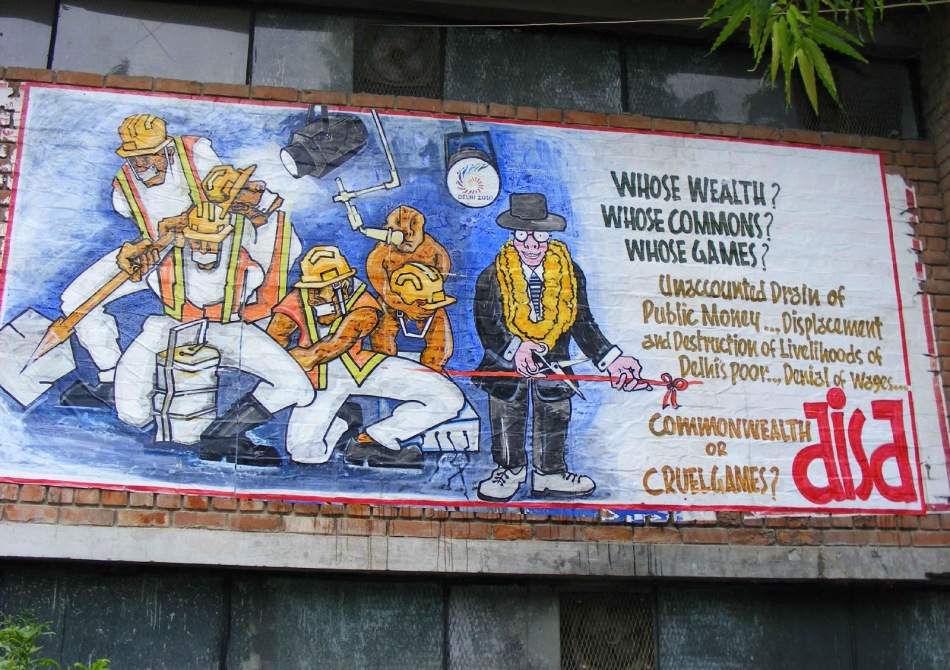 Fig 13. Splitting and deconstructing the words “Commonwealth Games” held in New Delhi in 2010, this poster speaks of the displacement and destruction of livelihoods of Delhi’s poor and denial of fair wages. 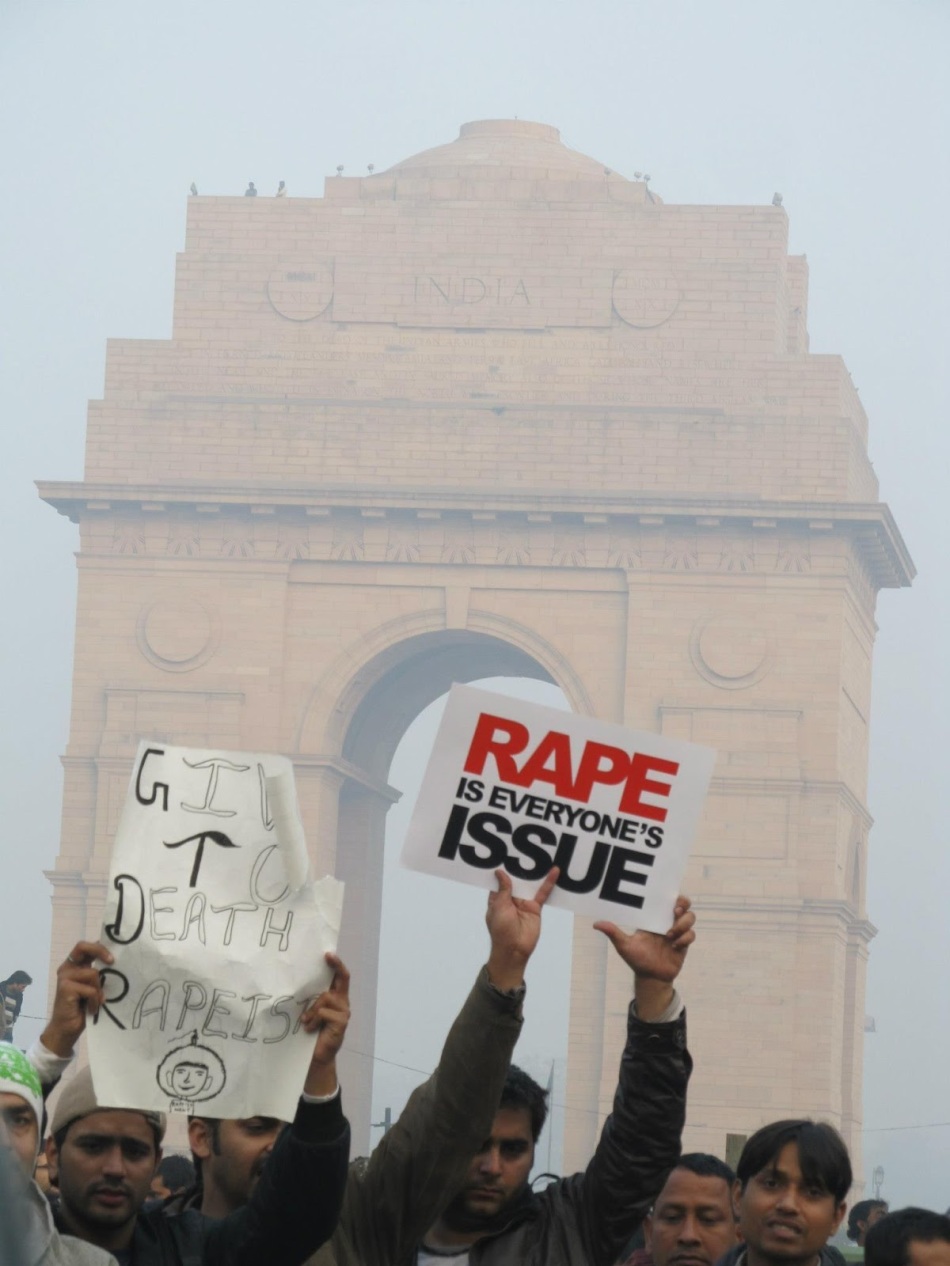 Fig 14. People from all walks of life including college students, NGOs, and other civic platforms came together to protest and express their outrage at the rising incidence of crime against women in general and the brutal Nirbhaya rape case committed in Delhi on December 16, 2010 in particular. 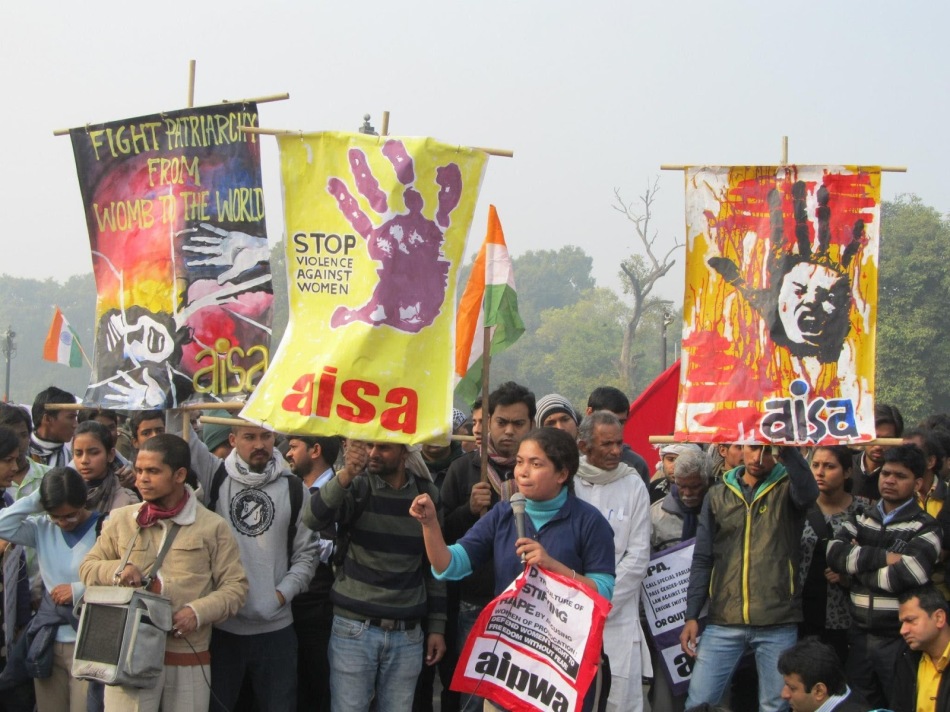 Fig 15. Students from different universities and civil organizations of the national capital protesting at India Gate in the wake of the Nirbhaya rape case that hit the nation and shook its conscience. 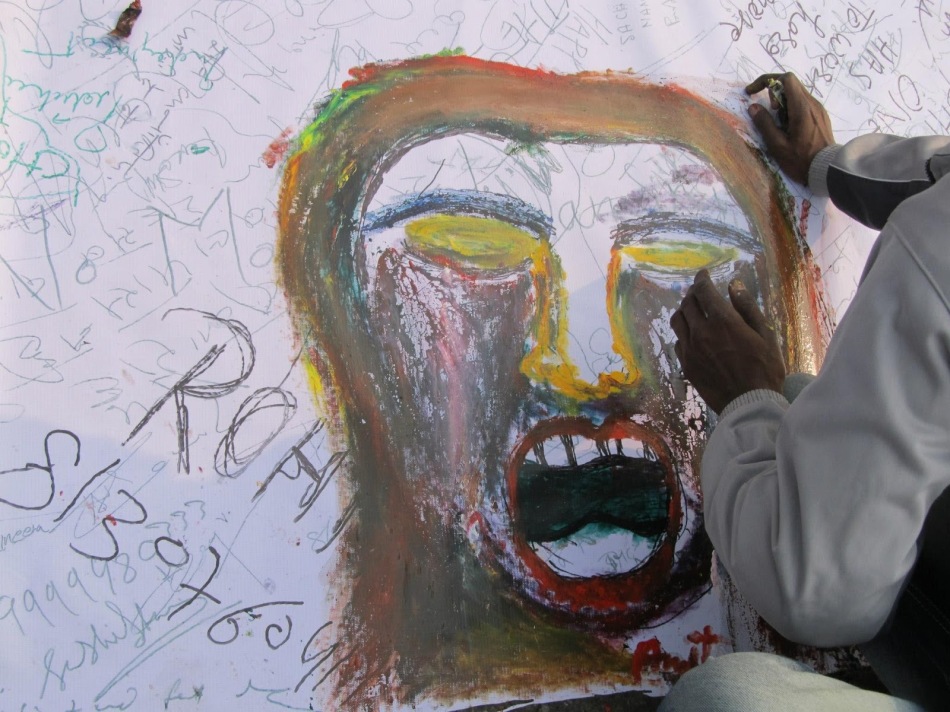 Fig 16. Agitators at India Gate on a signature campaign and the face of a rape victim drawn by the protestors who is demanding justice for the crime committed. 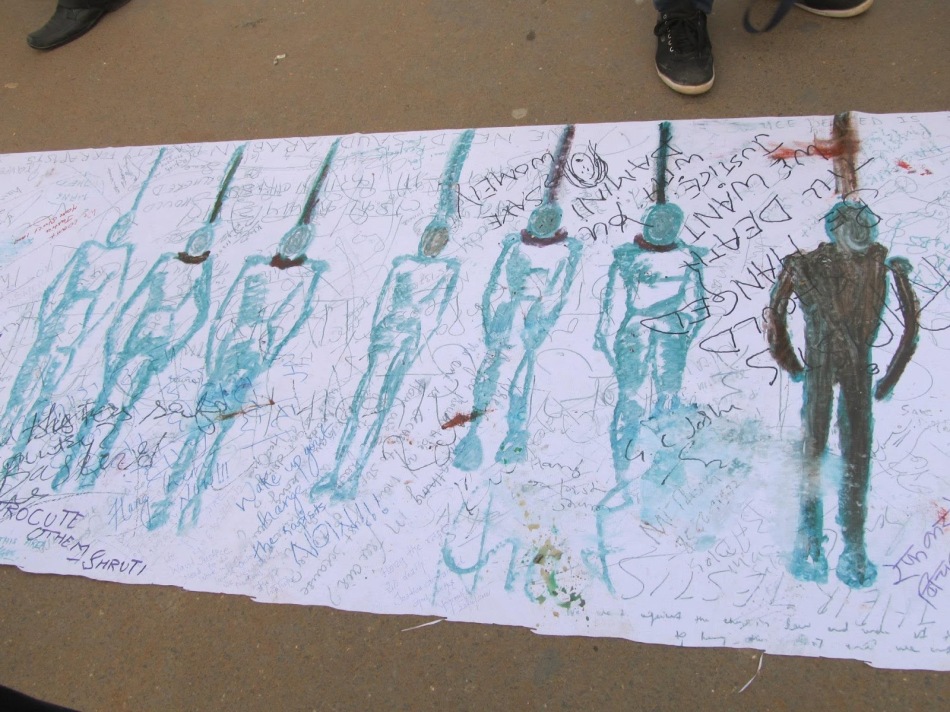 Fig 17. Protestors displaying their version of the final verdict for the seven convicts caught in the Nirbhaya rape case.

Subir is a sociologist by training and has a Doctorate in Sociology from the Jawaharlal Nehru University (JNU), New Delhi. His doctoral thesis deals with the past and present of a Denotified Nomadic Tribe (DNT) known as Nats which is born into caste-based inter-generational sex work in Bihar. He is currently located in Bangalore as an independent researcher after having completed one year tenure as a Post Doctoral Associate at the National Institute of Advanced Studies (NIAS) Bangalore. Some of the prominent fellowships received by Subir include the Tata Education and Development Trust Fellow 2017-18, Sir Charles Wallace Fellow 2011-12, Ford Foundation Fellow 2011-12, CSLG (JNU), Sir Ratan Tata Trust Library Fellow 2009-2010, SWS, Jadavpur University and the UGC Fellow 2007-2011, JNU.

Bordo, Susan. 2009. The Empire of Images in Our World of Bodies. Retrieved from http://www.researchomatic.com/The-Empire-Of-Images-In-Our-World-Of-Bodies-11335.html