For more on the revolutionary impact of World War I, see Thomas Messersmith’s “In Our Own Interests” examining the impact of racial and ethnic nationalism.

On June 19, 1917, a certain Mr. Labanevskii placed an ad in a Petrograd newspaper—under the headline “Escaped”—appealing for the return of a white Angora cat. On June 19, 2017, this same ad popped up in my Facebook newsfeed, sandwiched between posts urging me to call my senators about the health-care bill. How? And why?

To mark the hundredth anniversary of the 1917 Russian revolutions, Yandex—Russia’s equivalent of Google—has created Project 1917, which is essentially the turmoil of 1917, tweeted out now, in Russian, on a daily basis. (There’s also a more limited English-language version available thanks to translations from Pushkin House.) Each day, using only primary sources pegged to that specific date, the project posts social-media-style updates on its website and on various social media platforms.

Not everyone “posting” is Russian or in Russia, and not everything necessarily pertains to the revolutions directly. Hence the appearance on my Facebook feed (100 years too late) of Mr. Labanevskii’s missing cat. As you scroll through the posts on the website, you can go back in time, but there’s no way to go forward. It’s as if what happened next in the 1917 timeframe hasn’t yet happened. In that sense, the project is, as its editors put it, “a serial.” But, incongruously, it’s “in the form of a social network” (again, it’s 1917).

Thus, Project 1917 is a way not of looking back at the Russian Revolution, but rather of looking at the Russian Revolution now, as if in real time. Even though I’m writing my dissertation on French and Russian revolutions, I find that the “serial” format forces me to forget about what I already know is going to happen next and focus instead on the immediacy of what is happening as the posts appear. This builds a sense of anticipation for the next day. Having these updates pop up in my Facebook feed means that I think about each day of 1917, every day of 2017.

So what we have here is historical timeline as Twitter timeline.

One of the first things that struck me as I started scrolling through the daily Project 1917 posts was the unique way in which it introduced subjectivity into the timeline, by relying heavily on fundamentally personal primary sources such as diaries, memoirs, and letters, to guide its construction. As I took this in I began to see that I myself had dealt in subjective timelines, without necessarily realizing it. “Can we go over the timeline?” my students would often ask when I was teaching the French Revolution to undergraduates last year. I obliged, but as I didn’t want to overwhelm them with information (“Will it be on the exam?”), I worked up a limited list of events to give them some context for our focus on primary source readings. For example: Napoleon becomes Emperor in 1804 and is defeated for the final time in 1815 at Waterloo—don’t worry too much about what happened during those 11 years in between!

It’s powerful to view the passage of time as inherently heterogeneous, with an approach that enters into the more varied, subjective sense of lived experience.

Thinking back now on choosing events for my absurdly pared down timeline, I realize that, of course, all timelines, of revolutions or otherwise, are inherently subjective. Creating a timeline necessarily involves selecting what information to include and what to exclude, and results in a seemingly dispassionate document. So because we humans naturally tend toward a view of time as objective and homogeneous when writing or teaching history, it’s powerful to instead view the passage of time as inherently heterogeneous, with an approach that enters into the more varied, subjective sense of lived experience, whatever that experience may be.

This approach can make for some affecting juxtapositions, whether humorous, sad, or ironic. Some of the other posts from June 19, 1917 reveal that the first All-Russian Conference of Soviets continued on Vasilyevsky Island. Lenin and the Menshevik Irakli Tsereteli spoke. Meanwhile, in nearby Tsarskoye Selo, Tsar Nicholas II chopped up dried-out fir trees. But isn’t such jarring juxtaposition true of all social media? A post about a life-changing event is inevitably followed by a post about what someone ate for lunch. (Not that a really good lunch can’t be life changing in its own way!) 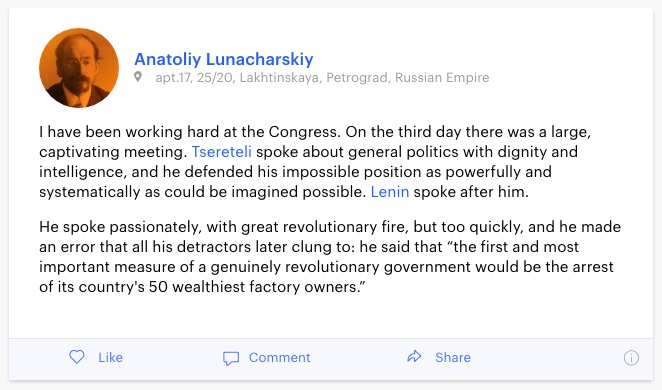 Before I started following Project 1917, I hadn’t thought too deeply about how revolutionaries or others caught in the middle of a revolution thought about time either. Lynn Hunt, historian of the French Revolution, takes up this question in Measuring Time, Making History using cognition research to speculate why, for French revolutionaries “the present seemed elongated. The newspaper Révolutions de Paris, for example, in its second issue referred to the third week in July 1789 as ‘a week that was for us six centuries.’”[1] Experiencing so many novel, complex events in such a short time, she concludes, changes how we relate them to one another—and underlines the inherently subjective nature of how we think about time.[2]

But what happens after that? Of course, French revolutionaries went so far as to change the calendar—12 newly named months of 30 days each, 10-day weeks, and a year zero of 1789, which was quickly updated to 1792 once the First Republic was declared. The experiment lasted 14 years. (Although the republican calendar was revived for a couple of weeks in 1871 by the communards, perhaps in a bid to claim the mantle of 1792.) There was also a push in the 1790s to shift to decimal time, with 10-hour days. Watchmakers experimented with decimal timepieces, but the switch proved too hard a sell.

Is there something particular to revolutions that inspires these projects to change the way time is marked? The manipulation of time was certainly part of early Soviet “utopian dreaming,” as one historian characterizes the tone of the period immediately after the revolution.[3] Beyond a pervasive enthusiasm for the labor optimization theories of Henry Ford and Frederick Winslow Taylor, there were smaller, stranger projects, such as the League of Time, founded in 1923 by activist and writer Platon Kerzhentsev—best known as a theater critic—whose members advocated for increased efficiency in all areas of life. They engaged in activities like rearranging the furniture in train stations while sporting “oversized wristwatches as the emblem of their struggle—a poignant symbol in a land where less than a million watches and clocks were produced in 1928.”[4]

Project 1917 represents a much-needed reminder of the primacy of storytelling and, thus, of subjectivity in thinking about historical revolutions as lived experience.

Like an oversized wristwatch reminding its wearer of the battle for time, ultimately, for me, Project 1917 represents a much-needed reminder of the primacy of storytelling and, thus, of subjectivity in thinking about historical revolutions as lived experience. Other historians of revolution have observed the importance of storytelling in creating a sense of revolutionary time; Frederick C. Corney points out in his book Telling October that commemoration of the October Revolution began almost concurrently with the revolution itself.[5] Scrolling through Project 1917 makes the genesis of that storytelling process tangible.

And it’s made me consider not only how historians approach time but also how I think about time in our own age. When I think about 1917 in 2017, in this political climate, I now see why it can be easy to feel like things are moving too slowly, or too quickly, or sometimes both at once—not to mention the current obsession with Russia-related timelines.[6]

Back in 1917, three days before June 19, the poet Nikolai Gumilyov reflected from his vantage in London: “Epics always follow after the events they glorify. At present, we are in the midst of great events; consequently, now is the time for drama, and this is likely to go on for some time. It is quite clear, however, that the events taking place today will provide epics for several generations to come.” Gumilyov was right, but he just couldn’t know what form those epics would take 100 years later.

Abby Holekamp is a Ph.D. candidate in Russian and Soviet history at Georgetown University. She is writing a dissertation on the interplay of French and Russian revolutionary cultures from 1905-1936 and how these interactions affected the production of new political knowledge across Europe. She is also watching a lot of television.

[2] As Vox recently titled one of its explainers, this effect accounts for “The strange reason Donald Trump’s presidency feels like an eternity.”

[5] Frederick C. Corney, Telling October: Memory and the Making of the Bolshevik Revolution (Ithaca: Cornell UP, 2004).

2 comments on “Time for a Revolution”